When I was quite young, I saw the first Star Wars movie and believed that, if I took part in a great cause, it would end with a medal ceremony and a princess conferring the medal.

It has finally happened.

Last night, I received a medal from Princess Tiffiniy Ying Cheng of Fight for the Future, representing the “committee for the Defenders of the Internet.” Bestowed upon me was the Nyan Cat Medal of Internet Awesomeness, the “highest honor known to Internet Defenders.” I could not be more honored.

Princess Tiffiniy’s organization was one of the leaders in the Battle of SOPA.  She and her partner Holmes Wilson are pretty amazingly brilliant–they were the people who organized the Free Justin Bieber campaign, led American Censorship Day on November 16, and were among the leaders organizing the January 18 Blackout. Many people pulled together from an array of communities to fight SOPA–Redditers, Wikipedians, civil libertarians, entrepreneurs, artists, venture capitalists, tech executives, consumer electronics makers, tech bloggers–alongside millions of people who just love the Internet and hate Internet censorship, from technologically advanced Wookiies to technologically challenged Ewoks. Many awesome people were involved in leading, coordinating, and taking the time to fight SOPA. Fight for the Future was absolutely essential to catalyzing all that activism–all while Holmes lived in an undisclosed location on an island and Tiffiniy lived on an apple orchard in rural Massachusetts with a spotty Internet signal.

I thank the princess and the entire committee for the Defenders of the Internet, not just for the medal but for their leadership in defending the open Internet. 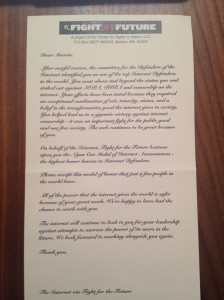 Proof that I sleep with the medal already:

I know. You may wonder: “Do you always sleep on your couch, while clutching a book written by Larry Lessig, wearing a tie and jacket just in case the Internet Defenders send out the Internet Bat Signal and call on you in the middle of the night to fight disastrous Internet legislation with a medal around your neck?”

Keep in mind: it’s only Alexis Ohanian who doesn’t need to sleep at all and only Mike Masnick who doesn’t sleep under a blanket but sleeps while standing up–on a treadmill desk while jogging and writing blog posts. 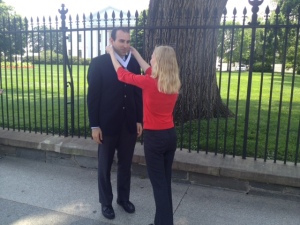 Because Princess Tiffiniy lives on an apple orchard far from DC, I had to ask another princess I know to stand in and to confer the medal on me, during her lunch break, beneath an oak tree. We found one near the White House.

UPDATE: Thanks Xeni/BoingBoing for the story and the link to the Fast Company props! Obviously, I love BoingBoing.

UPDATE 2: Here is a picture of Tiffiniy herself conferring the medal on Mike Masnick.